The War Graves in St Mary’s

The idea behind this page is to start a conversation for people to get in touch and let us know about the people who fought and died for this country in any of the wars – whilst detailing the actual people (this being the obvious and easy part) what I personally would love is to get some of the stories behind these people so we have a record and something personal to share with the community.

There are 33 casualties from the 1st World War buried here.

Feel free to either email me direct (Paul Fogg) from the button below or fill in the form – any background information will be great.

PS – the page is a work in progress and as I get time I will be adding as much detail as possible. Having discovered there are 41 war graves I’m working on getting all of these onto the website 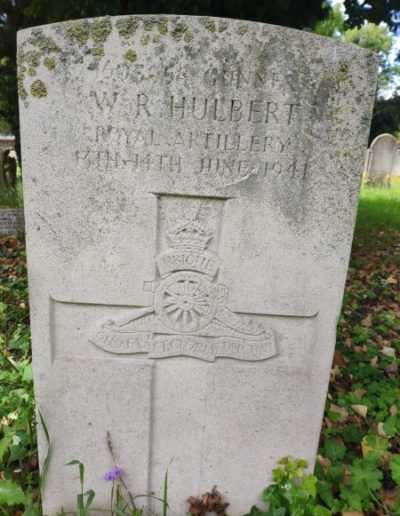 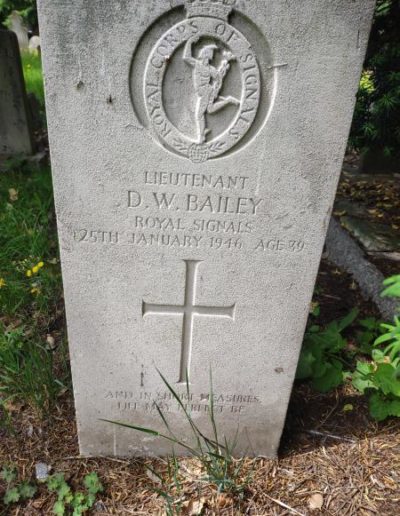 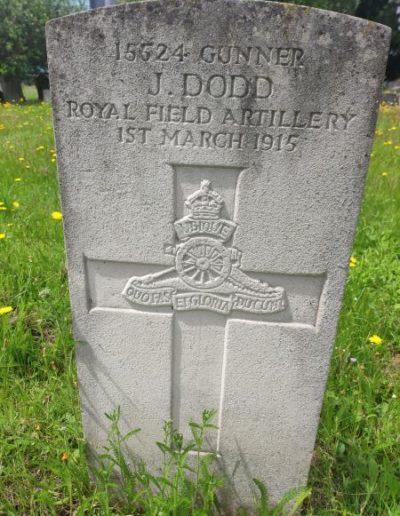 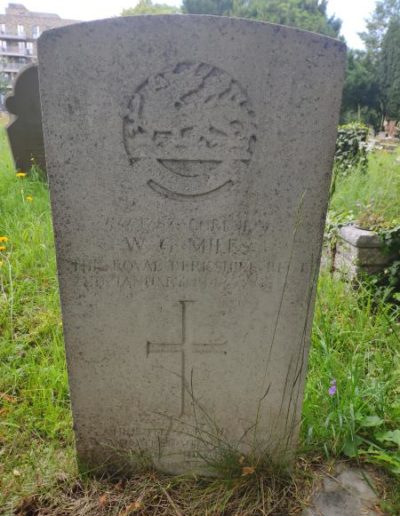 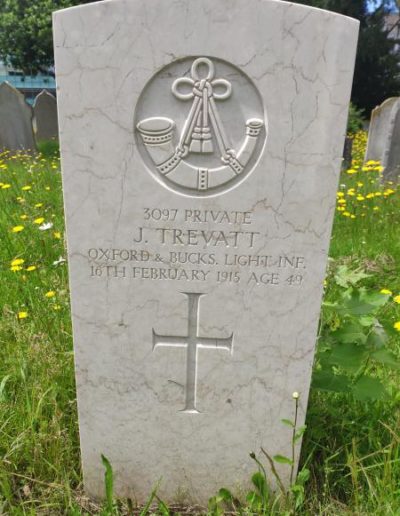 James joined the Royal Berkshire Regiment when he was 18 in 1885. He served until 1893. He joined the Oxford and Bucks Light Infantry in 1914 but after just 24 days was discharged as unfit – dying four months later on 6th February 1915 aged 49 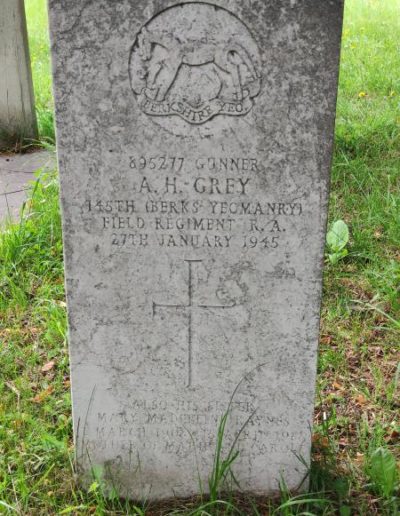 Alexander died 27th January 1945 as a regular soldier.
On the 1939 Census he is home on leave together with his brother Ernest with their family in Herschal Street.
They were both with the Berkshire Yeomanry, when he died he is a gunner with the Royal Artillery. 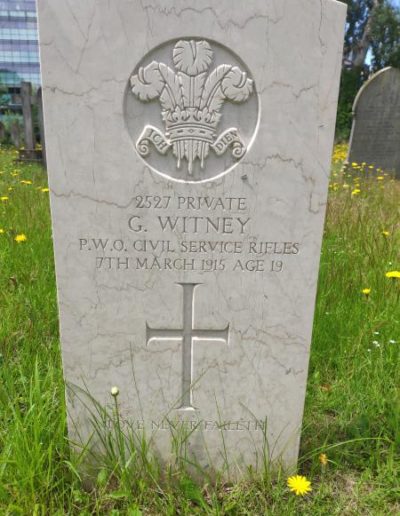 George was just 19 when he died on 7th March 1915 listed in the London Regiment of the Prince of Wales Own Civil Service Rifles. George’s family lived in Herschel Street – his father was a carpenter and builder, an employer of men. 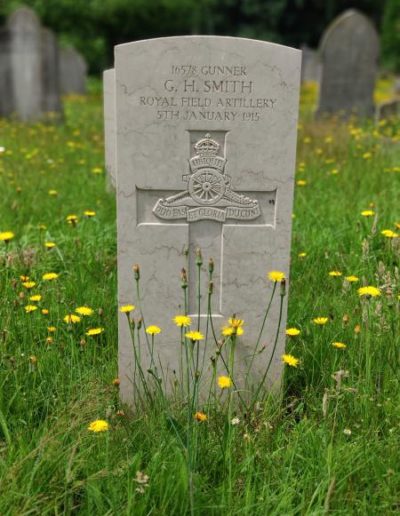 Gunner Smith was a flour miller from Stoke Gardens who died on 5th January 1915 leaving a widow and seven children. 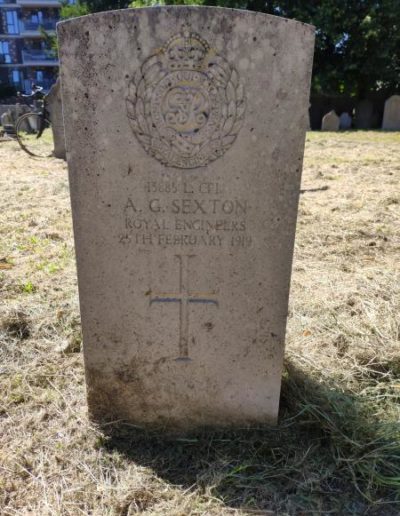 Lance Corporal with The Royal Engineers died 25th February 1919. We think he is Albert George who was born in Hayes but lived in Chalvey marrying Mabel Fordham in 1911 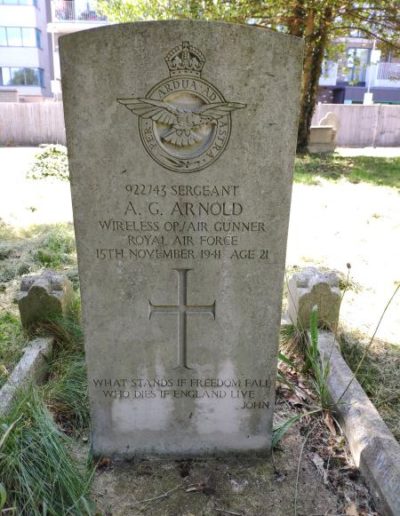 Albert died in Cambridge on 15th November 1941 aged 21. He is described as a Sergeant with the Royal Air Force Volunteer Reserve, a wireless operator and air gunner. He had lived with his parents in Albert Street his father being a kerb layer and paver for Slough Council Highways who had served in WW1. Albert had been injured by a gunshot wound to his back and was awarded a 12/- for himself ad 7/10d for his wife and children that makes 19/10d – you would have thought they could have found the extra 2d and made it up to a £1.00 ! 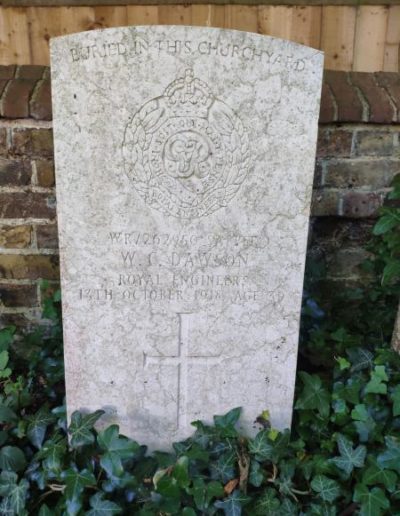 William was born in Slough in 1880 the son of William and Jane. His father was a chemist first of Park Place and later High Street. William became a clerk on the railway and then joined the Royal Engineers in 1915 aged 35. He died 13th October 1918 aged 39 in the Metropolitan Hospital Hackney of pneumonia following the amputation of part of his arm. In his will, where he left £339.19s.9d to his spinster sister Grace his address is listed as Southfield Road Bedford Park Chiswick. The local paper said his funeral was at 2pm on the 16th. 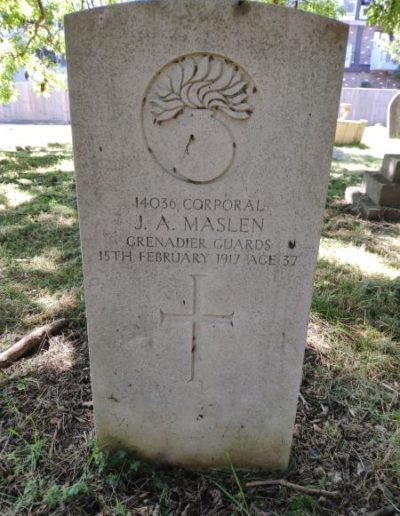 He was a corporal in the Grenadier Guard when he died February 15 1917 aged 37. He was a regular soldier joining for 12 years aged just 14 in 1893. He served in South Africa from 1899 till 1902. In 1905 he enlisted again for12 years giving his occupation as Railway Porter. In France he became ill from the “wet and cold”. He was discharged “no longer fit” in June 1916 and died the following February from tuberculosis. This Grave stone was installed in September 2018 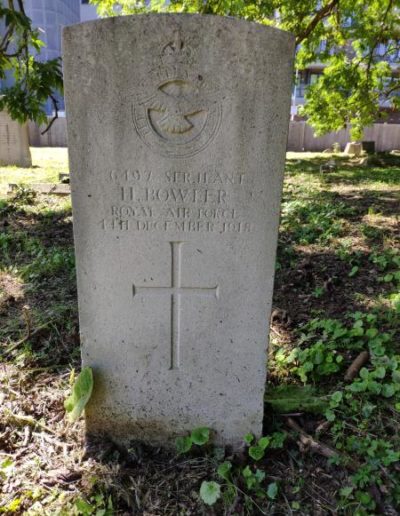 Herbert was a Serjeant in the Royal Air Force and he died December 4 1918 aged 42 in Lincolnshire. He had been a Slough coach smith. 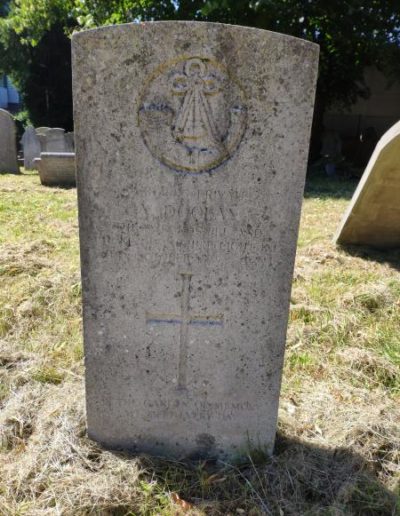 He was the first and youngest to die in Maidenhead Hospital on October 23rd 1939 aged just 18. He was a dispatch rider with the Oxford and Bucks Light Infantry whose home was Bradley Road in Slough. He had been involved in a collision with a lorry at Bisham Cross roads. The area was described as dangerous and had been, prior to the war, maned by an AA scout. 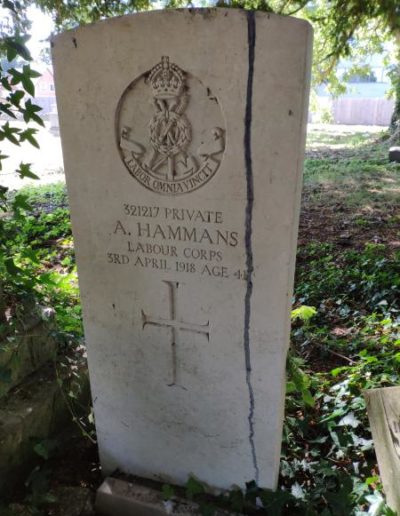 He was born in Slough in 1876 the son of John and Fanny. Both he and his father were tailor’s cutters. Alfred was living in Boveney when he married Margaret Roberts in 1904. Margaret was a teacher the youngest daughter of Inspector Roberts of the Bucks Constabulary. Alfred enlisted in the Labour Corps in 1915 and was later discharged as unfit. It would seem he had a mole on his back that got infected by the wearing of his back pack. Unfortunately he was not aware of this until he noticed a stain on the back of his shirt. He was operated on in November 1917 but died the following March. 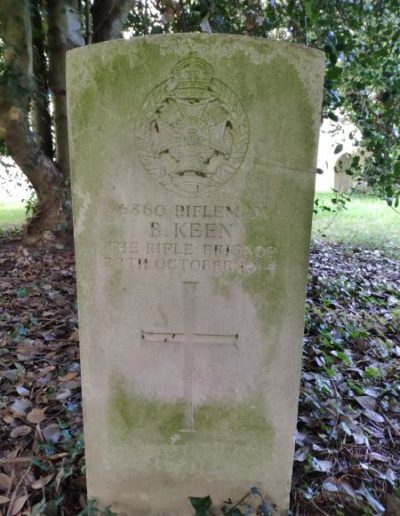 The first to die on October 27th 1914 from war wounds received in action was rifleman Bertie Keen who was from Chalvey. Bertie was 35 years old and according to the 1911 Census had worked for Horlicks. 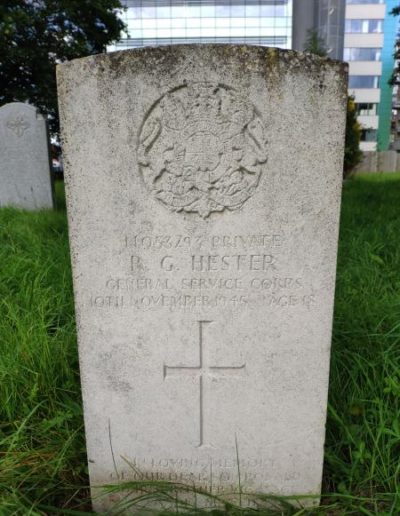 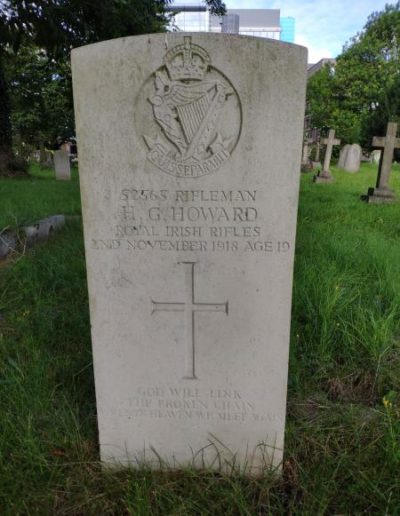 Harry died on 2nd November 1918 in Byfleet aged just 19 as a rifleman in the Royal Irish Rifles. Harry had lived on the Cliveden Estate where his father had worked. He is also remembered in Irelands Memorial Records. 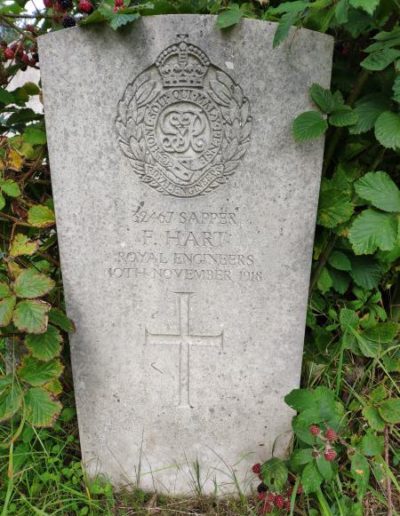 Another with just an initial we have assumed he is Frederick of the Royal Engineers who died 10th November. He joined in 1914 but was discharged no longer fit in 1917 suffering from tuberculous. He had worked for Horlicks as a carpenter. 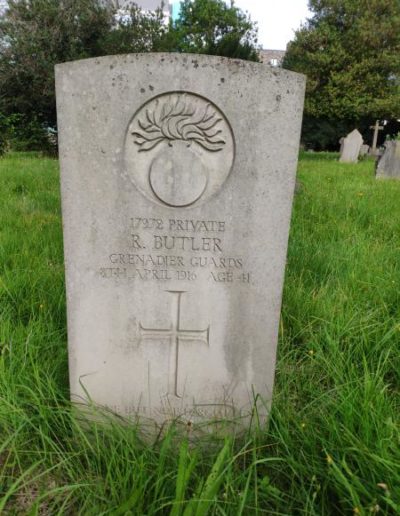 Another man with only the initial is R Butler of the Grenadier Guards who died 8th April 1916 aged 41. We think he was Robert. His brother Ernest was a regular who served 30 years with the West Yorkshire Regiment. He reached the rank of Major receiving the Military Cross and the OBE. Dying in 1940 aged 67. 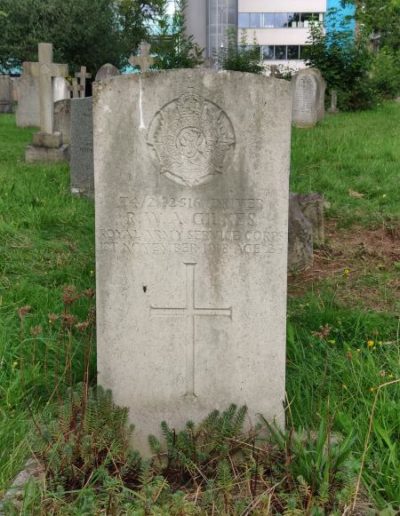 Reginald was born in Slough in 1893 the son of Alfred and Bertha, although he was baptised in Warwick. He married Mildred Preedy in 1917 in Greenford Parish Church and was already in the army. On the marriage certificate his father is also said to be in the army. Reginald’s daughter Mildred was born in Slough 1918 just 6 months before Reginald died on 1st November. I wonder if he ever saw her? He had been a driver in the Army Service Corps. 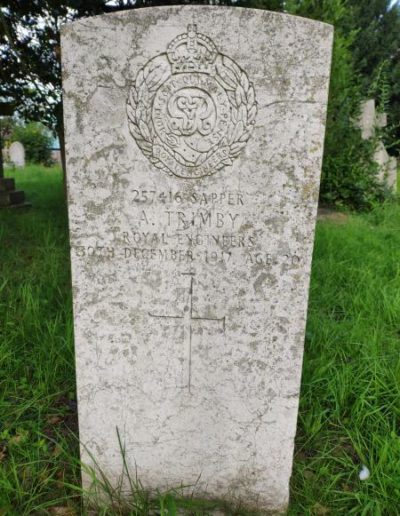 Archibald was in the 22nd Light Railway Company of the Royal Engineers when he died in Brighton 30th December 1917 aged 20. His family lived in Greys Place Stoke Road with some of them working for Elliman’s Embrocation Co. His older brother Charles died in France the following year aged 29.

Frederick joined the Royal Engineers in 1916 and died in Chester War Hospital 7th November 1918 aged 40. The army gave a pension of 33/9 a week 6 months later to his wife and 4 children. 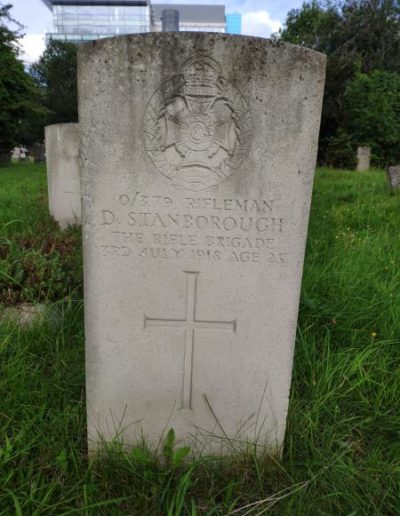 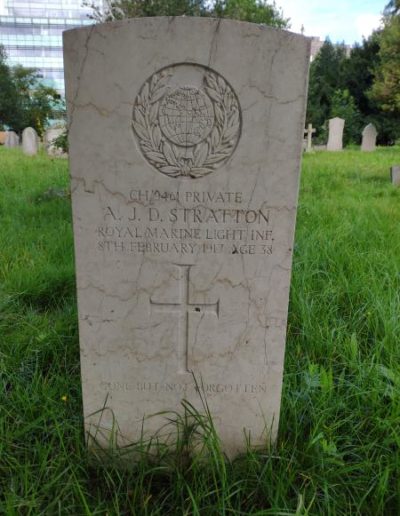 Albert was a private with the Royal Marine Light Infantry when he died 8th February 1917 aged 39 in the King Edward Hospital Windsor. He and his wife Nellie had lived at 34 White Hart Road Chalvey. 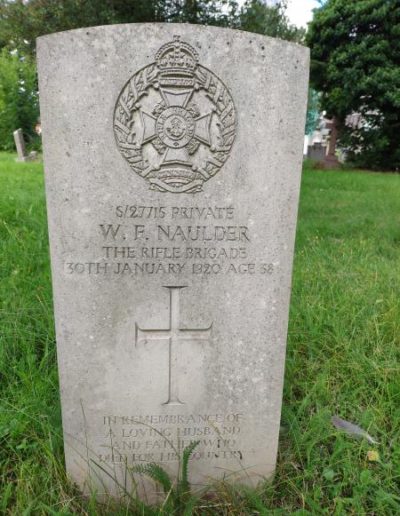 Walter was the last to die on January 30th 1920. He had been with the Rifle Brigade and whilst carrying out his duties as a stretcher bearer was hit in the back by a shell. 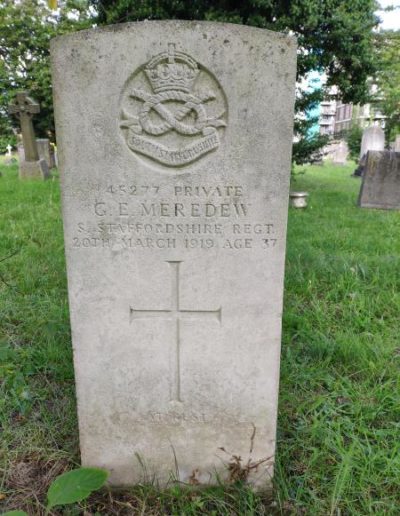 Yet another with just his initials. This I believe to be George Edward of the South Staffordshire Regiment dying March 20 1919. He had worked for Elliman’s and was expected to return to them after discharge. He was actually discharged with Cerebral Meningitis with a note to say he was not likely to recover. His wife wrote to the ministry to say that he was “very ill”.

We use cookies on our website to give you the most relevant experience by remembering your preferences and repeat visits. By clicking “Accept”, you consent to the use of ALL the cookies.
Cookie settingsACCEPT
Manage consent

This website uses cookies to improve your experience while you navigate through the website. Out of these, the cookies that are categorized as necessary are stored on your browser as they are essential for the working of basic functionalities of the website. We also use third-party cookies that help us analyze and understand how you use this website. These cookies will be stored in your browser only with your consent. You also have the option to opt-out of these cookies. But opting out of some of these cookies may affect your browsing experience.
Necessary Always Enabled
Necessary cookies are absolutely essential for the website to function properly. This category only includes cookies that ensures basic functionalities and security features of the website. These cookies do not store any personal information.
Non-necessary
Any cookies that may not be particularly necessary for the website to function and is used specifically to collect user personal data via analytics, ads, other embedded contents are termed as non-necessary cookies. It is mandatory to procure user consent prior to running these cookies on your website.
SAVE & ACCEPT